Ethiopian Human Rights Defenders Center (EHRDC) is a non-governmental, non-partisan,  and non-profit organization legally registered under the Federal Authority for Civil Society  Organizations under registry no. 5220 and Proclamation no. 1113/2019. EHRDC is established to create a strong national human rights defenders network that is dedicated to protecting and defending human rights defenders and journalists. EHRDC was established to ensure the safety, security, and wellbeing of HRDs. EHRDC has been continuously engaging with human rights defenders and journalists to enhance their capacity and to defend their rights.

Ethiopian Human Rights Defenders Center as an organization that stands for the protection of  Human Rights Defenders is deeply concerned over the escalation of arbitrary arrests and detention of journalists in Ethiopia. The new hope for media freedom that came from the government which was praised for opening up the previously restricted media by freeing detained journalists and bloggers when Prime Minister Abiy Ahmed came to power in 2018  has come crashing down recently through the arrests of numerous journalists with some of them still detained. From time to time, the freedom gained from the reform is eroding with the restriction of media in the country following the state of emergency which was declared on  November 2 as part of the government’s response to the ongoing war such as ordering local media to stop broadcasting as well as cease sharing foreign media reports.

According to the statement by The Ethiopian Human Rights Commission released on  December 15, 2021, Kibrom Worku, a reporter and news editor of Ahadu Radio and Television was arrested on October 22, 2021 and, Tamrat Negera, a former Addis Neger Newspaper journalist was arrested on December 10, 2021 with the whereabouts of Kibrom yet to be disclosed to his family and legal councils which goes against his visitation rights. The whereabouts of Tamrat were also unknown till December 17, 2021, seven days after his arrest in which EHRDC has learned that he was found to have appeared before the court at Gelan City with only family members allowed for visitation. In addition, Eyasped Tesfaye, the co-founder of the online media Ubuntu and Meaza Mohammed the co-founder of the online media outlet,  Roha Media were detained on December 7 and on December 11 respectively.

It is also worth noting that within a period of one year more than dozens of journalists were  arrested and two journalists Sisay Fida and Dawit Kebede were killed. Sisay Fida from the  Oromia Broadcasting Network (OBN) was shot and killed by unidentified attackers on the evening of May 9, 2021, and Dawit Kebede, a journalist from Tigray TV was shot and killed on the evening of January 19. The Ethiopian Human Rights Defenders Center is concerned that these human rights violations and abuses of journalists pose a threat to and put a strain on the rule of law process that our country aspires to achieve as well as further restrict the media freedom that must not be undermined by the government in any case including a state of emergency. In addition, the EHRDC believes the government must respect what is stated in the  FDRE constitution Article 29 as well as the Universal Declaration of Human Rights Article 19 granting freedom of expression without interference. We also believe that a state of emergency  should not serve as an instrument to the violations of human rights and stand by the statement  of the Ethiopian Human Rights Commission in that:

“The relevant authorities should closely monitor that the state of  emergency proclamation is implemented in a manner that strictly adheres to human  rights principles.”

Journalism serves as a manifestation of freedom of expression and journalists play a key role in a country by informing society and contributing to the peacebuilding of a country.  Therefore, Ethiopian Human Rights Defenders Center urges the government to keep its duty  of granting media freedom and safety of journalists in the country and respect the freedom of expression and provide protection to journalists and their essential role in the country. EHRDC  urges the government to disclose the whereabouts of Kibrom Worku to his family and lawyers and respect his rights to appear in front of a court. We also urge security officials and law enforcement bodies to comply with the procedure prescribed by law and respect what is stated under the FDRE constitution Article 19 of the Rights of Persons Arrested, Article 20 of the  Rights of Persons Accused as well as Article 21 of The Rights of Persons Held in Custody. 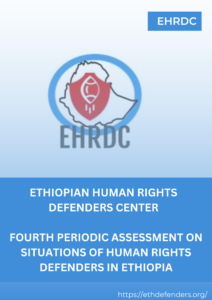