The award will help recognize the situations of human rights defenders in Ethiopia and highlight the risks they face in their daily lives as well as , the award enhance the award recipient’s human rights activities.

The recipient must follow a peaceful approach and must work from a deep personal interest to help others.

The recipient of the award is selected by the committee of Human Rights Defenders within the network of EHRDC which chooses from a short list of candidates presented by the organization’s team. The Committee shall make final decisions and inform the team which will facilitate the award-giving and announcing to the public.

Nomination can be sent via [email protected]. Nominations will be accepted only before January 11, 2022, after the release of this notice. Email subject should be Nomination for Human Right Defender of the year- EHRDC 2021

Nominations must be sent to [email protected] by January 11 2022 with the email subject “Nomination for the Human Rights Defender of the Year Award 2022”.

To find the nomination form in English

Omot Agwa Okwoy was the HRD of the Year on 2011 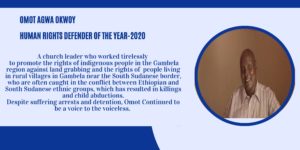 The winner will be decided by a committee of judges from different human rights-based CSOs in the country and will be officially announced on January 31, 2022